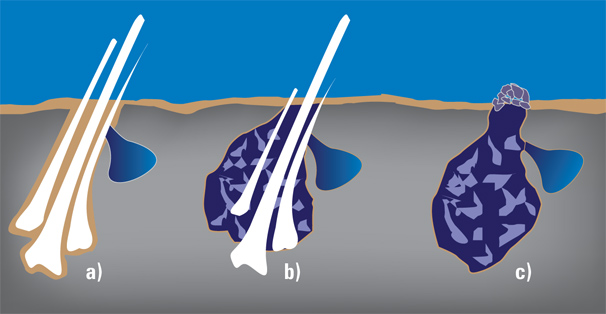 a) Healthy Follicle
b) DHT building up
c) Left untreated

There are many forms of alopecia (hair-loss). The most common form is andro-genic alopecia or male and female pattern hair-loss. Andro-genic is caused by the production in our systems of a sub-hormone known as Di-Hydra Testosterone or DHT. It is produced by both males and females after puberty and transported in our blood supply. For those of us who are genetically disposed to the effects of DHT accumulating in our hair follicles, causing gradual hair thinning and possibly causing total hair-loss over a period of time,  it can be quite devastating psychologically.

For those affected by DHT, each time a new hair is produced during its recycling program, it can be weaker and thinner that its predecessor. The hair regrowth cycle can become shorter and over a period of time it becomes more noticeable, progressively becoming worse.

If caught early enough,  this problem can often be resolved with one or two medications that have scientific evidence that of the success in stopping or dramatically slowing any further hair-loss.  In some cases it has shown to increase density in the slowly thinning areas of the scalp. Read more about these medications here.